Way back in 2004 when PeteNetLive started, I didn’t even consider monetisation of the site, it was simply a place for me to store my personal scribblings about problems I’d faced in support. But as it grew and it had to move from a second hand PC under my desk, to a dedicated server, then a rented VPS. The cost began to raise.

Back then there were a few ‘ad agencies’ but unless you were getting a LOT of traffic, they would not even let you though the door, but ANYONE could use Adsense, it was (and still is) the Advertising platform that Google provide. 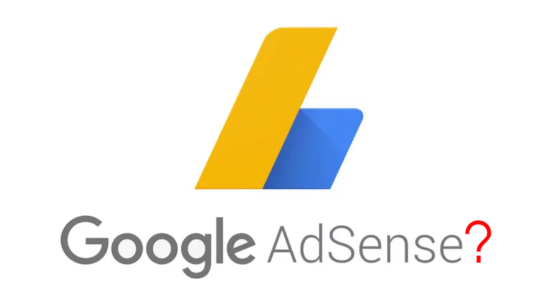 How does Adsense Work: Simply you put some code in your web pages, then decide what ‘size’ you want those ads to be, you place the provided code where you want the ads to appear. Then once they’ve generated enough income (clicks) Google will send you the calculated profit for those.

Have we ever used any other Ad ‘Providers’? Yes, we’ve advertised directly for Vendors (Veeam was a great partner for many years, and it was only because I felt we ‘outgrew’ the relationship that we discontinued it this year). We also use ‘BuySellAds‘ who are also an alternative but take a larger slice of revenue for themselves and getting your money out of them is a manual process, that can take a few days. We have used MediaNet who just seemed to resell Adsense, and take a middleman cut, or put video adverts in, that adversely affected my site speed and performance.

Why Look at an to Adsense Alternative?

Well for me there were two reasons. My web traffic has gone up dramatically, but my income from the site hasn’t got up at the same speed, so I can only deduce Google are taking larger and larger slices, and doing not a great deal more to justify that commission. And secondly they are effectively the worlds biggest ad agency and they cant even sort out ad code compliance without expecting me to fix it for them. (If they’ve fixed that in the interim great, but it was the straw that broke the camels back for me.)

In Autumn of 2020, I got an email from Newor Media, asking if I’d be interested in using them, I get a massive amount of emails from ad networks, SEO experts, people wanting consultancy, etc. Ninety Nine percent of them just get ‘speed read’ and deleted, and so did the one from Newor Media, but they politely followed up and I replied.

Why Use Newor Media?

Well they differ from other ad networks, insofar as they exist to get the best revenue for your ad space. They do this by auctioning ad units to potential advertisers, (including Adsense) and other advertisers who are not using Adsense/Adwords. Plus when I have a query or a problem I can email a ‘person’ who responds and is helpful, (Kudos to Katie!), and can escalate things, and get support directly. If you use Adsense your only helpline is usually ‘Other users of Adsense’ which is frustratingly terrible! So I agreed to give them a trial run.

Whats Involved / How Difficult Is It To Setup?

To be accepted, you need to meet certain traffic levels (those being, 30k unique users per month, with the large majority of those being English speaking e.g. en-us, en-gb etc). Once accepted they sent you an Insertion Order (If you’ve hosted ads with other companies this will be routine,) for the uninitiated its the legal agreement between you the site host and the supplier (Newor) so READ IT, then sign, date, and return it).

From there on, it’s pretty much the same as for Adsense, you add some code you your sites HEAD section, and they (Newor Media) will send you a small code ‘snippet’ to post into where you want the Ad to appear. (In my case thats a mixture of WordPress’Widgets’, and for the main content wherever I tell ‘Ad Inserter’ to put them! You will also need to maintain an ads.txt file on the root of your website (this is simply a text file that periodically you have to update (copy and paste) some text into).

How Much More Than Adsense Will You Make?

The 64 thousand dollar question 🙂 Well Adsense rules dictate you are not allowed to disclose what you are earning, so I can’t give you a direct comparison BUT what I can do, is demonstrate how much more you would be making with Newor Media. 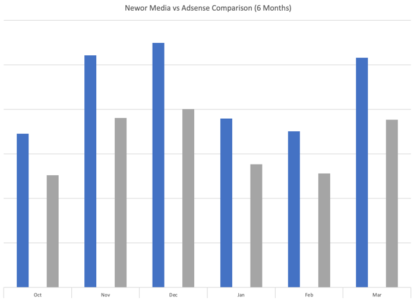 The graph above shows a comparison of  BLUE Newor Media (Oct 20 to Mar 21) and GREY Adsense (Oct 19 to Mar 20). Bear in mind my YouTube earnings are included in the Adsense figures also!

Adsense Alternative: OK I’m sold, Where Do I Sign Up?

Providing you meet the 30k unique visitors a month (primarily English speaking) threshold. Note:   You can get this information from Google Analytics: (Audience > Active Users > 28 Day Active Users) and (Audience > Geo > Language). Then you can apply (Click the link below and tell them PeteNetLive sent you!)