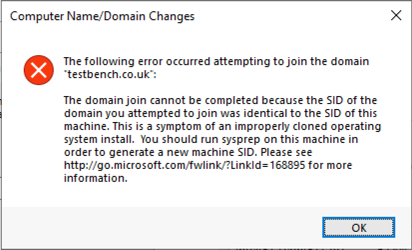 The domain join cannot be completed because the SID of the domain you attempted to join was identical to the SID of this machine. This is a symptom of an improperly cloned operating system install. You should run Sysprep on this machine in order to generate a new machine SID.

In my case it was a server I was deploying into EVE-NG and I hadn’t ran says-rep on the image, (typically I only need one Windows server in my EVE-NG labs, but this time I needed another), so then I added a second and tried to add it to a domain, this happened. I should know better really!

If you have ever deployed or imaged Windows you can probably guess what the fix is, ‘Run Sysprep‘.

Note: I will probably get emails saying ‘Why not just run NewSID?’, well because it’s not officially supported any more, and sysprep is. 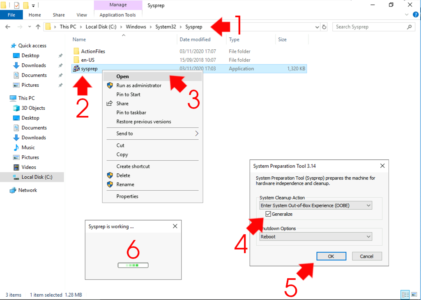 Go and have a coffee, when the server reboots, run though the OOBE setup, and try to join the domain again.