I know it’s not the usual site content, but PNL was born from my dislike of vendor documentation, and crappy documentation is not limited to the world of IT.

The 12v power socket in my A6 wasn’t working, this was probably because there was a 1p coin stuck in it that took a lot of fishing out, I assumed the fuse had blown, and put up with it for a while. When I finally got round to sorting it out today, I opened the ‘owners manual’, and looked for information on fuses and fuse box locations. Turns out I have three fuse box locations, one in either side of the dashboard, and one in the boot, (or trunk for our American visitors). It showed a zoomed in diagram of the fuse numbers and locations, and what each fuse was for, (which also turned out to be incorrect). What it didn’t say was where it was.

I rang the Audi Garage, no one was available, I rang another one, who was obviously doing what I had done and was Google searching it, (I could have saved him some time I’d spent an hour online). The best information I got was “it’s on the right hand side of the boot below the recess with the net over it”. This is true, but getting into it is another story.

On the right side of the boot is a recessed area with a small net over it see below, the net is held in place with a thick metal bar/rod, which will ‘pop out’ if you pull it and swing up through ninety degrees. 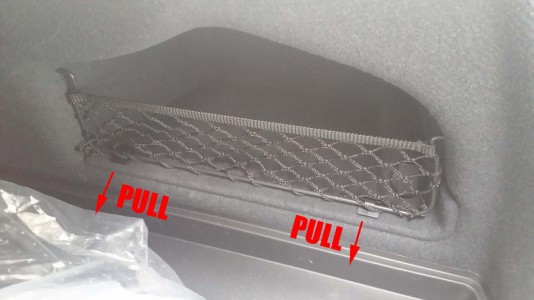 The two catches that hold the bar in place need to be removed, rotate them though ninety degrees anti clockwise, and you can withdraw them. 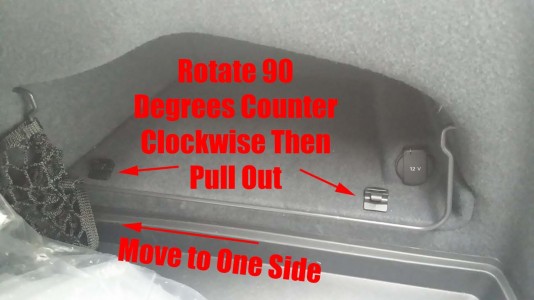 Now the base and rear of this recess are one piece that can be removed, (be careful the 12v socket shown above will come away also and is still connected, (that’s the wire you can see bottom right). The pink coloured fuse coveres will just ‘pop off’. The 20 Amp fuse, (indicated) is for the 12v power supply in the front center console (cigarette lighter). The 20 Amp fuse next to it is for the rear center console AND the boot 12V power supply. 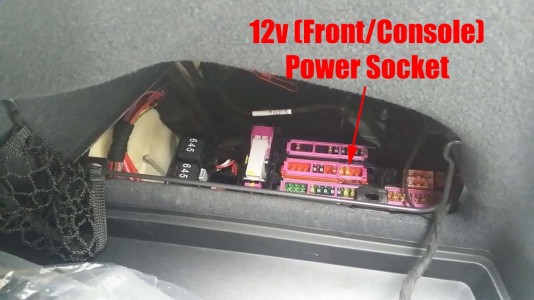