The call came in this morning, a client had replaced a failed drive in his SAN, (an MSA P2000 2324sa). He was asking if there was anything he needed to do. I said “Just mark it as a global spare and that should be it”. He rang back some time later to say he was still having problems.

When I dialled on I could see his ‘new’ drive was marked as LEFTOVR and was flagged with the following warning; 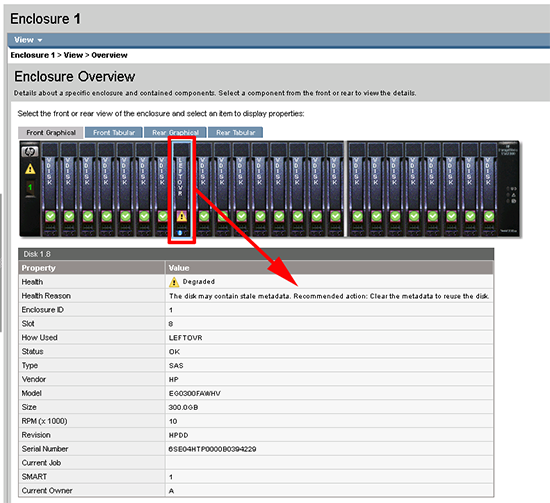 The disk may contain stale metadata. Recommended action: Clear the metadata to rescue the disk.

You see this error because this is a ‘recycled’ disk, and it still has data on it that refers to the array and/or vdisk that it was in originally. This is the ‘metadata’ that it is referring to.

Note: You can see, (from the image above) the disk I’m dealing with is disk 8 (make a mental note of that).

2. Remember our disk is in in slot 8, so tick it and click ‘clear metadata’.

3. You can now treat this disk as if it were a new disk and add it as a global spare, (your failed vdisk will then claim the disk and the RAID should rebuild it without further intervention).